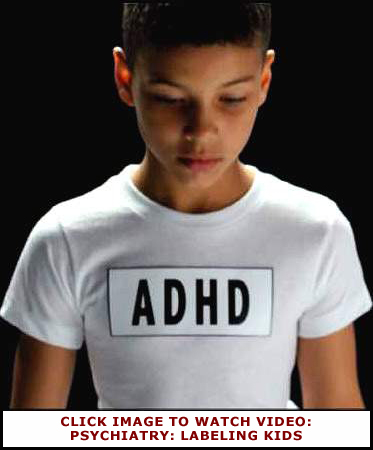 Twenty million children are labeled with “mental disorders” that are based solely on a checklist of behaviors. There are no brain scans, x-rays, genetic or blood tests that can prove they are mentally ill, yet these children are prescribed dangerous and life-threatening psychiatric drugs. Child drugging is a $4.8 billion-a-year industry.

1) THERE ARE NO TESTS IN EXISTENCE THAT CAN PROVE MENTAL “DISORDERS” ARE MEDICAL CONDITIONS.   PSYCHIATRIC DIAGNOSIS IS BASED SOLELY ON OPINION.

The psychiatric/pharmaceutical industry spends billions of dollars a year in order to convince the public, legislators and the press that psychiatric disorders such as Bi-Polar Disorder, Depression, Attention Deficit Disorder (ADD/ADHD), Post Traumatic Stress Disorder, etc., are medical diseases on par with verifiable medical conditions such as cancer, diabetes and heart disease.  This is simply a way to maintain their hold on a $84 billion dollar-a-year psychiatric drug industry that is based on marketing and not science.  Unlike real medical disease, there are no scientific tests to verify the medical existence of any psychiatric disorder.   Despite decades of trying to prove mental disorders are biological brain conditions, due to chemical imbalances or genetic factors, psychiatry has failed to prove  even one of their hundreds of so-called mental disorders is due to a faulty or “chemically imbalanced” brain.   To counter this obvious flaw in their push to medicalize behaviors, the psychiatric industry will claim that there are certain medical conditions that do not have a verifiable test so this is why there isn’t one for “mental illness.”  This is frankly a lame argument; Whereas there may be rare medical conditions that do not have a verifiable medical test, there are virtually no psychiatric disorders that can be verified medically as a physical abnormality/disease. Not one.

In fact the “brain scans” that have been pawned off as evidence that schizophrenia or depression are brain diseases, are simply bogus.  Most have not been done on drug naive patients, meaning someone who has not been on psychiatric drugs such as antipsychotic drugs, documented to cause brain atrophy (shrinkage).  Other brain scans have shown the brains of smaller children to show smaller brains in comparison to larger/older children and then claimed children with ADHD have smaller brains. None have been conclusively proven to verify mental disorders as abnormalities of the brain.

The Difference Between a Medical
Disease and a Psychiatric Disorder

If there were such verifiable brain scans, or in fact any medical/scientific test that could show a physical/medical abnormality for any psychiatric disorder, the public would be getting such tests prior to being administered psychiatric drugs.

This is fact: There are no genetic tests, no brain scans, blood tests, chemical imbalance tests or X-rays that can scientifically/medically prove that any psychiatric disorder is a medical condition.  Period.  Whereas real diseases are discovered in labs, psychiatric disorders are invented by committee and voted into existence.

2. YES, PEOPLE CAN GET DEPRESSED, SAD, ANXIOUS AND EVEN ACT PSYCHOTIC.  THAT DOESN’T MAKE THEM  MENTALLY “DISEASED”


No one is saying that people don’t get depressed, sad, troubled, anxious, nervous or even sometimes act psychotic.  The question then is simple—is this  due to some mental “disease” that can be verified as one would verify cancer or a real medical condition?  And the answer is No.   For example, can soldiers returning from war experience extreme and often debilitating stress?  Yes.  It is something wrong with their brain?  No.  It’s the horrors of war. Can children become distracted and not pay attention?  Since time immemorial, the answer is yes.  But psychiatry has pathologized childhood behaviors into a “mental illness.”   The same is true of mothers.  Can a new mother become distraught after a joyous occasion such as the birth of a child?  Yes.  Is it a brain abnormality or mental disease?  No. And is the most humane solution to put these people on drugs documented by international regulatory agencies to cause mania, psychosis, worsening depression, heart attack, stroke, sudden death?  Or for new or nursing mothers to risk birth defects or damage to their infants from being prescribed such powerful drugs?

This is also true of people diagnosed “schizophrenic.” There is no medical test to verify someone has a brain abnormality or medical condition of schizophrenia. And while no one claims  people can’t become psychotic, the fact remains there is no biological evidence to support schizophrenia as a brain disease or chemical abnormality.  And consider this, if people do become psychotic, or irrational,  is it in fact caused by some  underlying medical (not psychiatric) problem?   And why did a 15-year multiple follow up study find that there was a 40% recovery rate for those diagnosed schizophrenic who did not take antipsychotics, versus a 5% rate for those who did?  What happened to their supposed “brain disease?” Did it simply vanish?  Moreover, if they could recover from such a mental state, do they deserve the “stigma” of “schizophrenia” still being part of their permanent medical record?  For life?   Think about it.  Imagine you were extremely overweight—obese.  You lose all the weight so you are no longer obese.  Yet your medical records continue to say that you are.

And if schizophrenia is in fact a “disease” despite the fact there is no medical or biological evidence (note we did not say speculation, or theories, but evidence) then why is it that psychiatrist Loren Mosher, the former Chief of Schizophrenia Research for the National Institute of Mental Health (NIMH) openly state that there is no biological condition of schizophrenia as a disease or brain malfunction? And why didn’t the mental health industry take advantage of his 2-year-outcome studies proving that those diagnosed schizophrenic could recover without the use of drugs? Is it because this proved that recovery was possible and thereby disproved the theory that something was wrong with their brain? Or was it the fact that they recovered without the use of drugs, thereby threatening a multi-billion dollar pharmaceutical industry?  Maybe this explains why Mosher was fired from his position at NIMH.

The Side Effects of
Common Psychiatric Drugs

3. THE CAMPAIGN TO “STOP THE STIGMA OF MENTAL ILLNESS” IS BROUGHT TO YOU BY… BIG PHARMA

With a seemingly altruistic agenda, the fact is the campaign to end the “stigma” of mental illness is one driven and funded by those who benefit from more and more people being labeled mentally ill—pharma, psychiatry and pharmaceutical front groups such as  NAMI and CHADD to name but a few.   For example, take NAMI’s campaign to stop the “stigma” and “end discrimination” against the mentally ill—the “Founding Sponsors” were Abbott Labs, Bristol-Myers Squibb, Eli Lilly, Janssen, Pfizer, Novartis, SmithKline Beecham and Wyeth-Ayerst Labs. (For an in-depth look at what else Pharma funds and how this funding not only helps set mental health policies but campaigns such as this, read Pharmaceutical Industry Agenda Setting in Mental Health Policies at the bottom of this post)

4. PSYCHIATRIC “LABELS” ARE THE PROBLEM

Increasing numbers of people  realize that just because a child fidgets, or loses pencils or toys—criteria for an “ADHD” diagnoses, this doesn’t mean a child is mentally ill.   In fact many now claim that children  diagnosed  “ADHD” are really suffering from led toxicity, or allergies, or poor diet, or lack of reading skills, and not a mental “illness.”   The problem is that they continue to use the psychiatric label, ADHD, which stigmatizes a child as “mentally ill.”  If in fact a child suffers from led toxicity, then why not call it lead toxicity?  If he hasn’t been taught to read, why don’t we just say he hasn’t been taught to read?  The same is true of all psychiatric diagnoses—every single psychiatric label stigmatizes the person being labeled.    Psychiatric diagnoses are simply lists of behaviors that psychiatrists have compiled into little lists,  given a name,  added “disorder” on the end— then voted them into their billing bible, the Diagnostic and Statistical Manual of Mental Disorders (DSM)  as “legitimate.”   This is big, big business, but it isn’t even close to legitimate diagnoses.  Not in any medical or scientific context.   A profit making context? Sure.   Because coming up with new lists of behaviors and new “disorders” is the bedrock of the multi-billion dollar psychiatric/pharmaceutical industry.  Its how they get paid.   Remember, no psychiatric label, no billing insurance.  No psychiatric label, no drug prescribed.  So until we stop using these psychiatric labels,  which mean nothing other than what some psychiatrists decided was a mental “illness, ” we will never stop the “stigma.”  Because the psychiatric labels are backed by corporate interests—not medicine, and not science.

5. PSYCHIATRIC DRUGS ARE BIG BUSINESS—AND THE PSYCHIATRIC/PHARMACEUTICAL INDUSTRY IS MAKING A KILLING—$84 BILLION PER YEAR.


The primary reason people take psychiatric drugs is because they’ve been taught to believe they have a medical condition called a psychiatric disorder, which then justifies taking drugs to treat it.  This is a brilliant marketing campaign, but it is not science.  Any drug changes behavior or mood, whether cocaine, alcohol, marijuana or heroin. This does not mean someone who acts or feels differently on cocaine does so because they had a cocaine imbalance which the cocaine then corrected. It means that drugs changes mood, emotion and behavior.  But while the illicit use of drugs is universally frowned upon, and considered a bad way for people to deal with their problems, psychiatric drugs are made out to be “good” drugs, despite the fact many are more addictive than cocaine or heroin, and have side effects that rival such hardcore street drugs as LSD, heroin and crack cocaine.

6.  WHERE TO GET THE FACTS ABOUT PSYCHIATRIC DRUGS RISKS AND SIDE EFFECTS


Because the public has been so mislead by the psychiatric/pharmaceutical industry on the dangers of psychiatric drugs, CCHR has created a one-of-a-kind, easy to search psychiatric drugs side effects database, containing all international studies and drug regulatory warnings that have been issued on both classes of drugs (antidepressants, antipsychotics, anti-anxiety drugs, stimulants, etc) and brand names such as Prozac, Zoloft, Paxil, Risperdal, Seroquel, Ritalin etc.  These are provided by CCHR as a free public service to help people make educated decisions based on facts, not marketing campaigns

7. WHY SAFE, EFFECTIVE TREATMENTS TO MENTAL DIFFICULTIES ARE KEPT BURIED

The larger problem is that the biological drug model (based on the bogus mental disorders are a disease marketing campaign) prevents governments from funding real medical solutions for people experiencing difficulty.  And there are workable, non-harmful medical treatments that do not receive government funding because the psychiatric/pharmaceutical industry spends billions of dollars on advertising and lobbying efforts, including hundreds of their pharma funded “patient’s rights” groups to counter any medical modality that does not support their biological drug model of mental disorders as a disease. Why?  Billions of dollars in revenue for the psycho/pharma industry would be lost. This is an industry that time and again, has been proven to put profit above patients lives.